Tension can be defined as the pulling force transmitted along the chain, string, a cable, or other one-dimensional continuous object or by each end of a rod, truss member or similar three-dimensional object; tension can also be described as action-reaction pair of forces acting at each end of said elements. It is the force that tries to elongate a body or an object and the overall result in pulling away from the object.

Tension can be related to pulling on the ends of a rod and are often forces found on ropes, crane cables, nails, threads etc.

When the structure has a constant velocity and  in equilibrium, because the tension in the cable, which is pulling up the object, the tension force is equal to the weight force, i.e., mg.

M is a mass, and g is the acceleration caused by gravity, pulling down the object.

The Formula of Tension. Tension forces arise when an object tried to resist change in its shape. For example, if  two people  pull a string from both sides, string applies tension forces. String hopes that its length will remain constant.

The cable that supports the lift experiences tension. Cable has no motivation to transport humans, it is just trying to maintain its length.

Tension is developed in the rope during a game of tug of war.

Other Examples of Tension Forces When the object in compression, the force acting on it is directed towards the body and is associated with pushing the ends of a road toward the middle. An example is a concrete beam the weight of the structure acts on it by transferring its weight.

Tension and Compression in Beams and Trusses

When  like an I-beam or rod bend,  it means it is  are under tension and compression forces at the same time. For example, consider the I-beam  below: 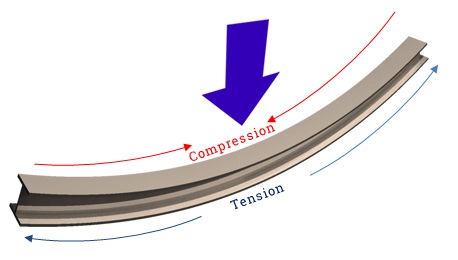 Compressive and tensile forces are present in all bridges, and it is the job of engineers to design bridges capable of withstanding these forces without buckling or snapping.
Buckling occurs when compressive forces overcome an object’s ability to handle compression, and snapping occurs when the tensile forces overcome an object’s ability to take tension.
The best way to deal with these forces is to either dissipate them or transfer them. To dissipate force is to spread it out over a greater area so that no one spot has to bear the brunt of the concentrated force. To transfer  and force is to move it from weakness to an area of strength, an area designed to handle the force. How to Break Up Concrete with Chemicals | Concrete Demolition Methods